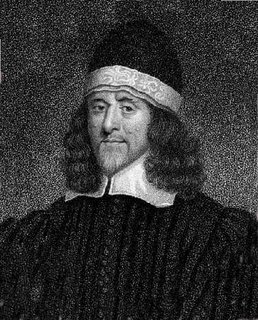 Thomas Goodwin (1600–1680, one of few Congregationalist Westminster divines) provides a good example for seminary students. He expounded his profound theological convictions with the kind of warmth which can proceed only from a personal experience of the gospel's saving power. His son glowingly reflects on his father’s Christian life and ministry; note especially the effect he had on “young scholars.”

It was many years before he came to have a clear knowledge of the gospel, and a full view of Christ by faith, and to have joy and peace in believing. “A blessed age this is,” said he in his latter years, “now the time of faith is come, and faith is principally insisted on unto salvation. In my younger years, we heard little more of Christ than as merely named in the ministry and printed books. I was diverted from Christ for several years, to search only into the signs of grace in me. It was almost seven years ere I was taken off to live by faith on Christ, and God’s free love, which are alike the object of faith.” His thoughts for so long a time were chiefly intent on the conviction which God had wrought in him, of the heinousness of sin, and of his own sinful and miserable state by nature; of the difference between the workings of natural conscience, though enlightened, and the motions of a holy soul, changed and acted by the Spirit, in an effectual work of peculiar saving grace. And accordingly he kept a constant diary, of which I have above a hundred sheets, wrote with his own hand, of observations of the case and posture of his mind and heart toward God, and suitable, pious, and pathetical meditations. His sermons being the result of these, had a great deal of spiritual heat in them, and were blessed by God to the conviction and conversion of many young scholars, who flocked to his ministry: as my reverend brother, Mr Samuel Smith, minister of the gospel at Windsor, told me, that his reverend father, then a young scholar in Cambridge, acknowledged mine to have been blessed by God as an instrument of his conversion, among many others.

This occurred to Jeremy Pittsley at 05:24