The Christian and Music (1): No Neutrality

To begin the suicidal discussion of music, I want to make my starting places clear. My underlying assumption through this discussion is that music is not amoral. What I mean is that even when considered without the words, music itself has a moral quality.

Someone might say, “What you are saying is that the individual notes on the page are either morally good or morally bad?” I would answer “Yes, of course.”

Here is my reasoning: On one side, everything in the world is created by the Moral Person who is himself the very definition of moral good. This Moral Person claims that the universe he created speaks (though without words) of his glory. Music is part of God’s creation, and nothing in God’s creation can be said to be morally neutral.

On the other side nothing humans do is devoid of moral quality because we are God’s image-bearers. For instance, everything unregenerate humans do is tainted by their rebellion against God. Unregenerate persons can do nothing which is not an expression of their depravity. In addition, regenerate persons will not be free from the effects of sin throughout their being until they are glorified. Music, at least as we know it, is an expression of human creativity, and nothing from a human’s mind can be said to be morally neutral.

To elaborate briefly on how image-bearing relates to music. I see music as an art; the objective of art, according to the Christian worldview, is to emulate the beauty of the Creator in appropriate creaturely venues. That humans were created with a capacity to appreciate beauty is evident from the account of the fall in Genesis 3. There, the text recounts that before Eve sinned, she “saw that the fruit of the tree was…pleasing to the eye” (Gen 3:6).

So how does this capacity relate to morality? In the end, it is absolutely wrong in every situation to love as beautiful that which is ugly in God’s eyes. God is Beauty, and his affections form the standard by which we should evaluate our own affections. Where is that standard revealed in the Scriptures? It is revealed throughout them, and it emerges as an integral part of the Christian world and life view. It is crystallized in a couple of passages like this one: “Finally, brothers, whatever is true, whatever is noble, whatever is right, whatever is pure, whatever is lovely, whatever is admirable—if anything is excellent or praiseworthy—think about such things.” Disobedience to this verse is sin out right; it is not morally neutral (Application of this verse—well, we aren’t there yet. Keep in mind that this is only a starting point. Specific musical genres and venues have not been considered at all. The only assertion which has been made is that music cannot be morally neutral because nothing in the universe is morally neutral.) 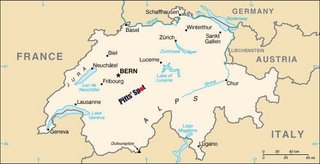 I will close with a quote from C. S. Lewis, who can sum it all up better than I can. “There is no neutral ground in the universe: every square inch, every split second, is claimed by God and counterclaimed by Satan.” C. S. Lewis, “Christianity and Culture,” in Christian Reflections, p. 33.

This occurred to Jeremy Pittsley at 13:15

I am not sure if I agree or disagree yet. What would prevent us from asserting that "things" are "relatively moral" or amoral . . . that is, they are moral or amoral by virtue of their connection to/relative relationship with a moral being (God, angels, demons, man)?

Responsible persons and impersonal "things" relate to morality in different ways to be sure.

However, because every "thing" comes from God there is no such thing as a morally unaffiliated thing. We can't even legitimately imagine "thing" apart from the characteristic of createdness. To do so is to think outside of the Christian worldview.

I guess my question goes more toward if we ought to assign a thing's morality on the basis of its createdness. If we assign morality to something by virtue of its creation, I think it will be difficult to distinguish between those things which are inherently good and evil since all things were created and since things subject to the fall. Perhaps not. I am interested to see which way your argumentation goes.

I think Baylor raises good questions in this direction of distinguishing. At best you can argue uniform evil after the fall from the totality of creation. Then in turn look to re-creative acts to restore skewd images of God.

Again, I don't know where you are headed, but apart from a redemptive work whether that come directly from God, or the redeeming work of an artist, or the redeeming interpretation of a listener the creation would seem in its original state. To your argument...then it would all be morally evil.

I'll be watching for your unfolding arguments as well.

Ok. The questions, as I understand them, are:

(1) If we are to agree that no thing is morally unaffiliated, how are we to determine what is evil and what is good?

(2) Assuming the morality of all things and the universal reach of the curse of the fall, how are we to avoid the conclusion that every thing is acutally immoral.

I'll be thinking about my response and addressing it on Friday. Let me know if I've misunderstood the questions. I'm looking forward to further conversation.

Depending on the use of "affiliated," I agree to the question. I would, presently, argue that morality of things depends on the relationship to beings of moral "aptitude" should we say. But I think you are arguing for the morality of the thing itself. So, I imagine that when you say that nothing is morally "unaffiliated" you mean that each thing is in the state of "moral" or "immoral." Is this correct?

The distinction between moral-in-itself and moral-in-relation-to-a-responsible-person is lost on me.
That's why I've been emphasizing createdness: everything is inherently related to God. You cannot abstract thing away from createdness and then consider its morality. Things can be considered nothing other than created and therefore they are inherently related to the Moral Person and therefore must have moral affiliation.

The distinction, in my mind, between "moral-in-itself" and "moral-in-relationship" is that a given object does not stand in relationship to all things in the same way, and thus takes on a different characteristic dependent upon the object of its relation. Say, for instance, a peeping-tom stands in a different moral relationship to a wife than a husband does, if you catch my drift.

Ok. I think I'm on board with you there. When I say "moral-in-itself," I am not saying that a thing necessarily stands in the same moral relationship to everyone.

All I am saying is that all things are always a part of at least one moral relationship. A dust particle from the remotest galaxy, which is of no concern to humans or angels, pleases God to the extent that it proclaims his glory. That's what I mean when I say it is not amoral.