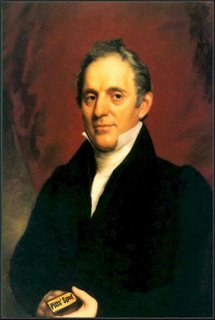 We went over Asahel Nettleton in class the other day, and I thought this quote was irresistible. He is defending the Reformed (read: Christian) doctrine of depravity against Pelagian Taylorites (e.g. Charles G. Finney).

That some do preach in this manner, cannot be denied. I well recollect an instance. A celebrated preacher, in one of his discourses used this language: ‘Come unto me, all ye that labor and are heavy laden, and I will give you rest.’ In another discourse, this same preacher said: ‘No man can come unto me except the Father which hath sent me draw him.’ Now, what think you, my hearers, of such preaching, and of such a preacher? What would you have said had you been present and heard Him? Would you have charged Him with contradicting himself? This preacher, you will remember, was none other than the Lord Jesus Christ! And, I have no doubt, that many ministers have followed his example, and been guilty of the same self-contradiction, if you call it such” (Bennet Tyler, Nettleton and His Labours, 216-17).

This occurred to Jeremy Pittsley at 06:56

By the way, is that a ring that Nettleton is wearing? Does his ring say "Pitts Spot"? Wow. Still too busy?

In the original it's a pocket bible. I quickly transmogrified it into a little Pitts' Spot card. It really doesn't take that long to do that. It takes a lot longer to actually think something through and write something original (which, if you'll notice, I haven't been doing).