God, Maker and Savior of Humankind 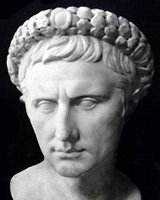 The God-centeredness of God is the kind of concept that can enrapture a soul with its beauty. God doesn’t need his creation (Acts 17:25), and it is his over-flowing joy in his own character which produces his zeal to express his glory in creation. All of creation and providence centers on God’s zeal for his glory (Rom 11:36, Rev 4:11, Ps 115:3). It's a rock-hard cornerstone on which theology ought to be built.

But, as with all theological concepts, it must be defined according to the authoritative revelation we have from him. That's where some helpful nuancing comes in from Jollyblogger. God isn't God-centered in a way that makes humans insignificant. He makes the point that humans are made in God's image and that our Redeemer had to be human to effect redemption. Along the same lines, it is humans that God has given the job of ruling over creation (Ps 8); and it is a human, the first Adam, who ruined it. It will be a human, the second Adam, who will bring about its restoration.

Relatedly, this guy also reminds us that God's stated purpose in John 3:16 is to make salvation from hell available for humans. Now the latter fellow hints that he is not at all fond of the God-centeredness of God as a theological concept (though it springs irresistibly from the Scriptures), but his point about salvation from hell is well-taken. In significant ways, God's unfolding story of creation and providence, fall and restoration, has humans on center stage.

In the end, however, we must conclude that God's man-centeredness is a function of his God-centeredness. It is his image-bearers he loves in John 3:16, just as it is their worship he seeks in John 4. And that is why his wrath will burn forever against those who refuse to take joy in him (2 Thess 1:8-9).

Being human is great! Let us take joy in him who made us so.

This occurred to Jeremy Pittsley at 20:16

Pitts, nice work on the sidebars. You've exercised your dominion mandate as far as .html is concerned. Kudos.

I'm probably more like Achan than Adam on this one: pillaging not producing ;)

which bible character do I get to be (seeing as how I CAN'T FIGURE IT OUT!)?