A Portrait of a Shepherd 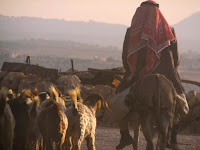 The war-torn church had many casualties. Despair and confusion pervaded. Surely not our elders—they would not fall; they would hold the faith. “Even from your own number,” Paul’s words from that sermon on the beach years before echoed in their ears, “Men will arise and distort the truth in order to draw away disciples after them” (Acts 20:30). It happened, just as Paul had said. But the Spirit was not thwarted; he sovereignly raised a new army of shepherds to care for sheep and to fight pride and lies and greed. Timothy was there not only to silence the false teaching but to restore order to the church, and presiding over the choice of officers is part of that. Here Paul paints a portrait of the shepherd for the recovering Ephesian church.

Here is a trustworthy saying: If anyone sets his heart on being an overseer, he desires a noble task. Now the overseer must be above reproach, the husband of but one wife, temperate, self-controlled, respectable, hospitable, able to teach, not given to drunkenness, not violent but gentle, not quarrelsome, not a lover of money. He must manage his own family well and see that his children obey him with proper respect. (If anyone does not know how to manage his own family, how can he take care of God's church?) He must not be a recent convert, or he may become conceited and fall under the same judgment as the devil. He must also have a good reputation with outsiders, so that he will not fall into disgrace and into the devil's trap.

He is to protect the sheep through apt teaching and a godly example. He is not to stoop to the bickering and peddling of the false teachers, nor is he to abandon his home responsibilities as they may have. The task before them is noble, so they must show themselves worthy of it.

This occurred to Jeremy Pittsley at 00:00