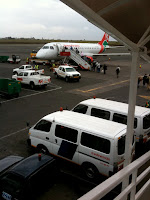 Note: I wrote the following update two Sundays ago while we were still in S. Sudan. We have returned safely to Zambia. Another update is forthcoming (JLP, 29-Sep).
God has been granting us a great time here. Our teaching responsibilities and a bit of tourism are keeping us pretty busy, so I only have time to share three memorable moments from my first week here.
Our first week we taught through the Apostolic Doctrines. We summarized the teachings of the apostles found in Acts and the Epistles outlining them according to the Grand Story of the entirety of the Scriptures: Creation, Fall, Christ, Redemption, and Kingdom. About 40 pastors have been sitting with us each day for roughly six hours of teaching. They have been very attentive! My first two memories are from the classroom: 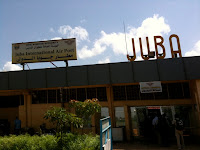 (1) On Tuesday we spent nearly the entire day on the Fall and its effects. Starting in Genesis through most of the Old Testament, we traced the history of Israel and the world. We showed how sin and death had become masters over the human race. We pointed out that sin's mastery extended to every facet of our being, and we showed from the Scriptures how deep its control runs in each one of us (e.g., Jeremiah 17:9, Romans 8:5–8). Finally we came to mankind's lowest moment. The worst expression of this depravity is when we killed God's only Son. Up to this point the day had been depressing. Examining the Fall is not precisely fun; as one of Josiah's storybook Bibles says, "It was a very sad day." But the last 15 minutes of class were absolutely electrifying. Because in that lowest moment of human history, as we were executing God's Son, God was executing his plan. Because the Son became obedient even to death, the Father has highly exalted him. All authority in heaven and on earth is given to Jesus Christ after his resurrection. Through him, everyone who calls on his name will be saved. Through him sin and death will no longer be our masters. Now Christ is risen. Now Christ is the master! I doubt I will ever forget the palpable elation of the class at that moment. 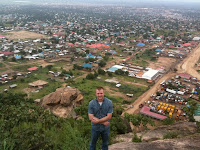 (2) On Wednesday, we were discussing Christ. One of the points that we wanted to explain is why we must have a fully human mediator. Why did God have to take upon himself a perfect human nature? As we sought to answer that question, another question came from one of the students: "I have heard from some that Jesus was born from Joseph, but others say he was conceived by the Holy Spirit. I'm confused. Which is it?" What an opportunity and privilege we have had to teach the Scriptures where the need and thirst for God's Word is so desperate!

(3) My final memory is from this morning's church service. The man who had been working to plant the church here in Juba was sharing a testimony. This South Sudanese church-planter told us how while he was in exile in Uganda he first heard and believed the gospel and was trained to plant churches. As he reminisced he said, "Some time ago when we saw the white color we would run away. As children, we were afraid. When I was ten years old, we thought they would eat us. Now we do not run because the blood of Christ has made us one." Someday soon Christ will conquer the fear we have of each other, and that process has already begun for citizens of that coming kingdom. Soon we will all be joined as one happy throng around the throne of God rejoicing: "Worthy is the Lamb!" May that hope purify our hearts today!
Kevin and I are thankful to the Lord to have enjoyed safety, health, and stamina while we have been here.
Please continue to pray for us and our families as we seek Christ's fame in Africa.
Thank you for praying,

This occurred to Jeremy Pittsley at 10:09 0 contribution(s)