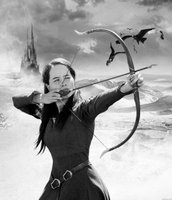 With less than three weeks until Easter, you might wonder at my title, but I wanted point out something I had missed over the holiday season. As an introduction to fan fiction ("fiction written by people who enjoy a film, novel, television show or other media work, using the characters and situations developed in it and developing new plots in which to use these characters"), I suppose this is not a bad specimen. It is a short story of Susan the Gentle from the Chronicles of Narnia.

If you remember, Susan was not with Aslan and the others at the Last Battle because she had stopped believing in Narnia. I don't particularly like that ending, but I am not altogether sure I would like it changed either. But I enjoyed the short story, so I won't spoil the plot.

I think what striked me most about the story is actually something from the book. It is the power of self-deception. Susan, even while she had contact with others who believed in Narnia, denied truth that she knew by experience. Seeing Aslan, ruling Narnia for decades, knowing dozens of Talking Animals did not seal the deal for Susan. All the experience in the world could not give her the kind of faith that lasts.

A warning Lewis would have intended (though undoubtedly coming at it from a different theological framework) is the necessity of genuine conversion and perseverance. How desperately we need the gospel of grace in both realms! Without it we live under the wrath of God because we squeeze out of thought what he has made obvious to everyone: his true deity and inexhaustible might. We see it all around us, and we know it from within as well. But, without grace in conversion, we push it down and try hard to forget it at every turn (Rom 1:16-32). And, on the other side, without Christ upholding us by grace through the gospel, without his Spirit preserving our spiritual life, perseverance would be impossible.

This occurred to Jeremy Pittsley at 07:10